I’m alive! This blog hasn’t been updated in about half a year, so I thought I would post to clarify that ShroomDoom Studios still exists. I’ve just been very, very busy! We’re (I’m) a one-man team here at ShroomDoom, and I’m also a full-time student, so school takes priority over developing whenever I’m not on vacation. I have been working on some projects, but none of them are big enough or complete enough to post about yet. You may be wondering, “Why hasn’t there been a Dungeon Mage update?” Well, there are two reasons:

This really sucks, because there’s a bug in the current published build of Dungeon Mage that skews the touch input it receives on Microsoft Surface tablets, which essentially renders the game unplayable (and also gets it lots of one-star ratings). This game-breaking bug was an under-the-hood problem with GameMaker that has been fixed since August. Unfortunately, it’s been replaced with a host of new problems. I’ve been considering re-writing the game from scratch, but I don’t think that will be possible because of my schedule. What I’d really like to do is make a game with Unity 3D (which is way more stable than GameMaker).
So the good news? I’m not dead. The bad news? As of now, the current version of Dungeon Mage is (I’m hoping to get around to a sequel, though).

By the way, I finally made an actual logo!

In celebration of reaching almost 1,500 downloads on the Windows Store (1,490 to be exact), here’s the cinematic trailer for Dungeon Mage!

It took a lot of time finish, and it’s not perfect, but it’s interesting. A gameplay trailer is also on the way. For those who want to know, this trailer was animated in Blender 2.6.

It came a little late, but after three submissions for certification Dungeon Mage finally made it onto  the Windows Store! You can download it onto your Windows 8 machine for free here:

A lot of work has gone into this game, so it’s great to finally see it available on its target platform. I’ve already found a few bugs (especially when the game is running on Surface tablets), so expect to see some fix updates soon.

ShroomDoom Studios’ first app for the Windows Store, Dungeon Mage, will be released within the next two weeks! We’re targeting for next Saturday.

ShroomDoom Studios’ latest game, an RPG called Dungeon Mage is almost done being developed! It will be released on the Windows Store sometime within the next month. 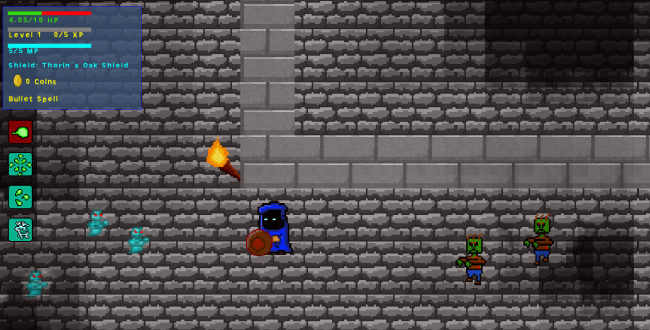 In Dungeon Mage, players can go spelunking through dungeons full of monsters and treasure. Unlock powerful spells to aid you in your quest to become the ultimate wizard!

You can watch a playlist of development vlogs for Dungeon Mage here: http://www.youtube.com/watch?v=QqHQm83S4mo&feature=share&list=PLO61y98zw1c8JfU78bCNQFOoor_X7ksJ3